Dr Andrew Chapman is the CEO and Co-founder at Carbometrics, a company that was spun out from Ziylo Ltd, where he was previously CSO prior to it’s sale to Novo Nordisk in 2018. The Royal Society of Chemistry recognised Andy for “leading the scientific team of a small diabetes spin-out company towards one of the highest value exits for an early-stage technology, and for pioneering new commercial opportunities with a second company founded after the acquisition.”Novo Nordisk are using Ziylo’s technology to develop smart insulins to treat diabetes. Carbometrics works in collaboration with Novo Nordisk on the smart insulin programme, as well as developing its own glucose sensing platform.

Harry Destecroix, Founder and former CEO at Ziylo, Director and Co-founder at Carbometrics and CEO at Unit DX, said: “I could not think of a more deserving person for this award, Andy is one of the smartest and most hard-working people I have ever met. He joined Ziylo as CSO in 2017 and was immediately adding immense value, driving the strategy and science forwards.

“Andy rapidly built the technology and team, helping to lead the company to its acquisition by Novo Nordisk in just 18 months from joining. After the acquisition, Andy was promoted to CEO of Ziylo’s spin-out, Carbometrics, where he continues to be the driving force for the company.” 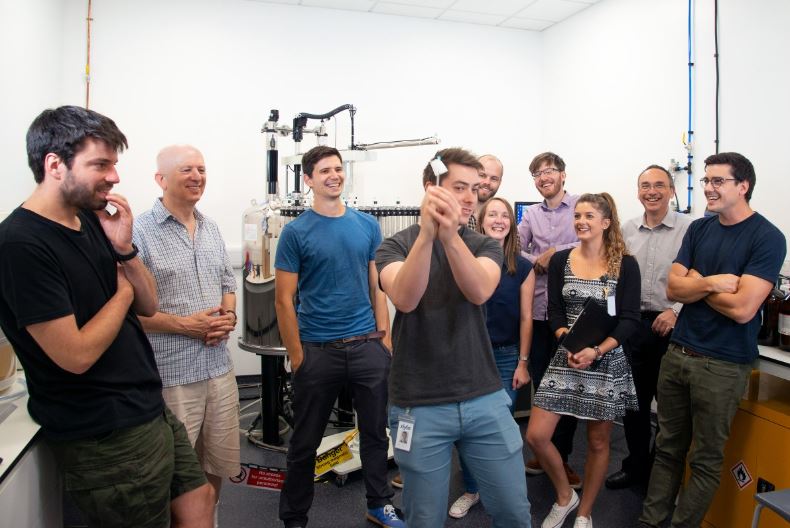 Andy and the rest of the team at Unit DX.

After receiving the award, Dr Chapman said: “I am delighted and privileged to be recognised by the Royal Society of Chemistry as a Rising Star in Industry.

“Since moving from my academic position in 2017, I have been on a whirlwind tour of business, Big Pharma and scientific start-ups. It has been a non-stop pleasure to have had the opportunities to expand my knowledge in such a diverse range of fields. Working at the boundary between business and science has given me a new perspective on how to direct scientific research and I feel I have found my calling working in the sector I do now.”

Dr Chapman, who holds both undergraduate and postgraduate degrees from the University of Bristol, also receives a trophy in recognition of his award.

“We live in an era of tremendous global challenges, with the need for science recognised now more so than ever – so it is important to recognise those behind the scenes who are making significant contributions towards improving the world we live in. It is our honour and privilege to do that with these awards, which recognise exceptional scientific achievement.

“The global chemical sciences community is one that covers many different specialisms, from health and climate change to product development, sustainable transport, and everything in between. In recognising the work of Dr Chapman, we are also recognising the important contribution this incredible network of scientists makes to improving our lives every day.”

The Royal Society of Chemistry’s Prizes and Awards are awarded in recognition of originality and impact of research, or for each winner’s contribution to the chemical sciences industry or education. They also acknowledge the importance of teamwork across the chemical sciences, as well as the abilities of individuals to develop successful collaborations.

Of those to have won a Royal Society of Chemistry Award, an illustrious list of 50 have gone on to win Nobel Prizes for their pioneering work, including 2016 Nobel laureates Jean-Pierre Sauvage, Fraser Stoddart and Ben Feringa.

Last year, the Royal Society of Chemistry announced it is reviewing its recognition mechanisms. Details of how the awards structure will be changed – to ensure that the way excellence is recognised is fit for today’s needs – will be announced later this year.